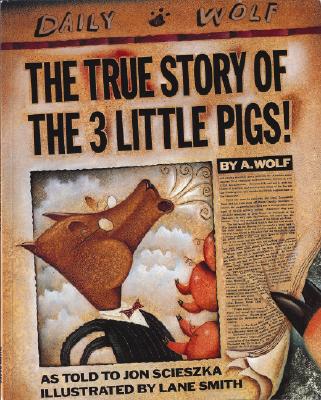 “Read as much as you can, and then sit down and write.”

John Scieszka was born on September 8, 1954 in Flint, Michigan. He was the second oldest of six boys. Six. Boys. His mother was a registered nurse, and his father was an elementary school principal. His father’s parents came from Poland, and their last name, “Scieszka,” in Polish, means “path.”

Scieszka explains his early childhood and how he became a writer this way: “When I was one day old, I learned how to read. When I was two days old, I started to write. By the time I was three, I had finished 212 short stories, 38 novels, 730 poems, and one very funny limerick, all before breakfast.”

In reality, he went to Culver Military Academy for high school, then studied pre-med at Albion College. After graduating he decided to write instead, and headed to New York, where he graduated with his MFA from Columbia University in 1980.

Then, according to Scieszka “I taught elementary school and painted apartments for ten years. Now I write full-time and never have to change a thing I write. Every book comes to me in a flash of inspiration and takes me about two seconds to finish. The longer books, like the ‘Time Warp Trio’ novels, take a little longer to write – more like four seconds.”

Actually, while teaching and painting apartments he took a year off to write. He sent the stories to many publishers, and got rejected by all of them, so he went back to painting, and writing. Then his wife Jeri, who was working at a magazine as an art director, introduced him to the illustrator Lane Smith. Lane provided some illustrations for Jon’s story – A. Wolf’s Tale.

This too got rejected by many publishers. But, they kept shopping it around, and finally Viking Books published the book, in 1989, as The True Story of the 3 Little Pigs!, which has now sold over 3 millions copies.

Since then, he has published a lot of books. A lot.

In 2008 Scieszka was named the first National Ambassador for Young People’s Literature by the Library of Congress.

Don’t take yourself too seriously, and never give up. Keep painting apartments and writing.