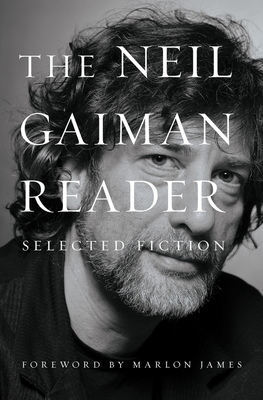 ― Neil Gaiman The View From the Cheap Seats: Selected Non-Fiction

His family was Jewish and also studied Scientology, although Gaiman doesn’t closely associate himself with either religion. He met his first wife, Mary McGrath, while she was studying Scientology. They were married in 1985 and had three children. (They divorced in 2007.)

Always wanted to be a writer, Gaiman became a journalist in the 1980s, learning about the craft and interviewing people that could lead him into the world of publishing. His first published story was “Featherquest”, a fantasy story, in Imagine Magazine in May 1984. That same year he wrote a Duran Duran biography and a book of science fiction and fantasy quotes with Kim Newman, Ghastly Beyond Belief. In 1986 he published Don’t Panic: The Official Hitch Hiker’s Guide to the Galaxy Companion, a biography of Douglas Adams. He also wrote many articles for British magazines, many under pen names.

In the late 1980s, Gaiman formed a friendship with comic book writer Alan Moore and began writing comics and graphic novels. DC Comics hired him in 1987, where he started to write The Sandman. The original series ran for 75 issues from January 1989 to March 1996. In 1991, The Sandman No. 19, “A Midsummer Night’s Dream,” became the first comic ever to receive a literary award, the 1991 World Fantasy Award for Best Short Story.

Along with being credited as a creator of modern comics, he’s also a writer whose work crosses genres and ages.

American Gods, published in 2001, is one of his most-awarded and best-selling books. In 2017 a television adaptation of the novel was released.

He is the first author to win both the Newbery and the Carnegie medals for the same work, The Graveyard Book (2008)

In 2013, The Ocean at the End of the Lane was voted Book of the Year in the British National Book Awards. Other best-selling works include Anansi Boys (2005) and Coraline (2002).

Gaiman is known for writing the first draft of his books using a fountain pen, namely the Pilot 823, which is a $300 pen that I now want.

In 2011 he married songwriter and performer Amanda Palmer, and they have one son. He was one of the first popular authors to have an online blog in 2001, which he continues today on his website: https://journal.neilgaiman.com/

Most of Gaiman’s advice on writing is – keep writing. He’s got a plethora of stuff out on the internet – interviews, videos, motivational speeches, and books like Make Good Art. Follow him, read his stuff, and write.