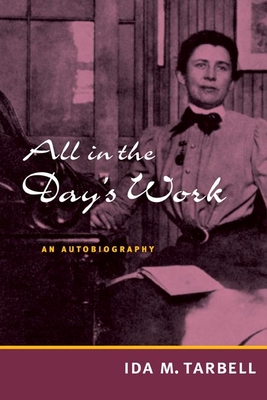 Imagination is the only key to the future. Without it none exists — with it all things are possible.

Ida Minerva Tarbell, one of the nation’s first and foremost investigative journalists, was born on November 5th, 1857, in a log cabin in Hatch Hollow, Pennsylvania. Later the family moved to Titusville, Pennsylvania, where her father made a good living opening in oil. Then, in 1872, her father and many others involved in oil lost their prosperous businesses with John D. Rockefeller’s move to monopolize his Standard Oil Company. During a three-month period, known as the ‘Cleveland Massacre,’ Rockefeller and his company used illegal acts and unfair practices to take over 22 of his 26 competitors in Cleveland. He partnered with the railroads to receive special rebates and incentives that other companies couldn’t compete with. Tarbell’s father’s business partner killed himself, and her father mortgaged the family house to pay company debts.

After graduating from High School in Titusville, Pennsylvania, Tarbell attended Allegheny College. Growing up, Tarbell had been interested in science and fascinated by microscopes, even owning one of her own. In College, she studied biology but quickly realized the sciences were mostly closed to women. She changed her focus and her major to writing, and was the only woman in her graduating class in 1880.

After College, she taught two years before she quit. She then became a writer and editor of the Chautauquan, a monthly magazine out of Meadville, PA, promoting the idea of culture and self-improvement during the 1880s.

In 1890 Tarbell took her savings and moved to Paris to research a projected biography of Madame Marie-Jeanne Roland, a writer and leading figure in the French Revolution. Tarbell supported herself by writing magazine articles for Scribner’s, McClure’s, and other American Magazines.

In 1894 she returned to American, not finishing her biography of Roland, became a full-time writer for McClure’s magazine. Her feature on Napoleon Bonaparte and her 20 part series on Abraham Lincoln for the magazine were wildly successful, doubling the circulation. She was also offered a book deal from the Lincoln series, and The Life of Abraham Lincoln, a four-volume set, was published by Doubleday & McClure Co in 1900.

In 1900, three decades after she witnessed the ‘Cleveland Massacre,’ Tarbell began to issue her 19 part series “The History of Standard Oil Company” in McClure’s magazine. The series started when Henry H. Rogers, who knew Tarbell’s father from the independent oil business and had worked alongside Rockefeller growing Standard Oil, reached out to Tarbell through their common associate Mark Twain. After reading Tarbell’s biography of Lincoln, Rogers may have thought Tarbell would write a flattering piece involving him, as he divulged a lot of sensitive information. Compiled through painstaking work digging up documents and interviewing employees and lawyers, the series and later released book eventually set the break up of Standard Oil’s monopoly in motion. The book The History of Standard Oil Company, released in a 2-volume set in 1904 by McClure, Phillips & Co. In 1911 Standard Oil was broken up by the Supreme Court when it was found to violate the Sherman Antitrust Act.

Tarbell was one of the most influential ‘muckrakers’ of the Gilded Age and helped issue in the Progressive Era.

In 1924 she moved permanently to Easton, Connecticut, and continued to write. In 1939 she published her autobiography, All In the Day’s Work.

Ironically, although she was a pioneering investigative journalist and made a successful name for herself in her chosen career, she was outspoken in her belief that a woman’s place was in the home. Tarbell did not believe in women’s rights to vote., stating that they were too emotional to be involved in politics. She also reportedly said the only reason she was glad she was a woman was so she didn’t have to marry one. However, she did believe women should have the right to education and earn their own living, as seen in her own life. Tarbell never married or had children, defying the domesticity expectations of her day, and many historians contemplate that her double-minded views of women’s role in society may have been a reaction to her personal bitterness and forgoing marriage and children to have a successful career.

Tarbell studied her subjects, including Rockefeller, very closely. She took notes on his climb to success, how he studied the competition and had patience to execute the most minute details. Her quote about him seems to reflect attributes she applied to her own life and journalism career:

“But one of Mr. Rockefeller’s most impressive characteristics is patience. There never was a more patient man, or one who could dare more while he waited. The folly of hurrying, the folly of discouragement, for one who would succeed, went hand in hand. Everything must be ready before he acted, but while you wait you must prepare, must think, work. “You must put in, if you would take out.”