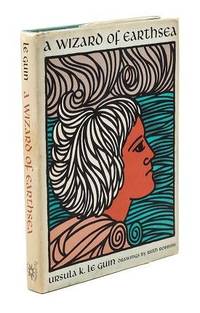 “All of us have to learn how to invent our lives, make them up, imagine them. We need to be taught these skills; we need guides to show us how. If we don’t, our lives get made up for us by other people.”

Ursula Le Guin was born on October 21, 1929, in Berkeley California. Her father, Arthur Louis Kroeber, was an anthropologist, and her mother, Theodora Kroeber, had a graduate degree in psychology and later in her life turned to writing. In 1961, when she was 64, she published Ishi in Two Worlds, an account of the last member of the Yahi people of Northern California that sold widely and was highly praised.

Ursula attended Radcliff University, graduating with a bachelor’s degree in Renaissance French and Italian Literature before earning her master’s in French from Columbia University. She began studying for her Ph.D. and earned a Fulbright scholarship to study in France. While traveling to France, she met historian Charles Le Guin, and they married in Paris in 1953. She discontinued her graduate work, and the couple eventually settled in Portland, Oregon, and had three children.

Le Guin began writing full-time in the 1950s. Her first published work was a poem, “Folksong from the Montayna Province,” published in 1959, followed by a short story “An die Musik” in 1961. Both works were set in her fictional world of Orsinia. In the 1950s, Le Guin also wrote five novels based in Orsinia, all of which were rejected by publishers.

She then turned her attention to Science Fiction, publishing several stories before Ave Books published her first novel, Rocannon’s World, in 1966. Rocannon’s World and her next book, Planet of Exile, were published as ‘Ace Doubles’ – two separate novels published in one low-cost paperback.

In 1968 a small Berkley Press, Parnassus Press, published A Wizard of Earthsea, a coming-of-age novel about a young wizard on the archipelago of Earthsea. It was her first children’s novel and attempt at writing fantasy, and it received critical acclaim.

The following year her masterpiece, The Left Hand of Darkness, was published and became immensely successful. It was considered groundbreaking in its investigation of gender roles and moral and literary complexity.

Her 1974 novel The Dispossessed, a utopian novel set in the same fictional universe as The Left Hand of Darkness, was the winner of the 1974 Nebula and 1975 Hugo awards for best novel.

In total, Le Guin is the author of 21 novels, 11 volumes of short stories, 4 collections of essays, 12 children’s books, six volumes of poetry best known for her speculative fiction including Sci-Fi.

Among her awards were six Nebula Awards, seven Hugo Awards, and the Science Fiction Writers of America Grand Master. Her books have been nominated for the Pulitzer Prize and the American Book Award. In 2000 she was named a Living Legend by the Library of Congress.

Her final volume of poetry, So Far So Good, was published just after her death.

Le Guin chose a genre where there were almost no women writers, and elevated the literary status and possibilities within in. Just like the imaginative breadth of her worlds was endless, she placed no limitations on herself, and moved fearlessly through the world of creation. And her work gave others the inspiration to do the same.

She was also the mother of three children. And just like her own mother, who raised four children yet pursued her own interests and dreams, Le Guin raised her children and chose to pursue her creative work, which sustained her long after her children had grown.