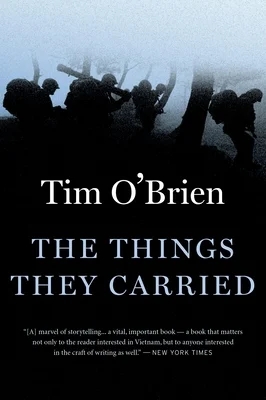 Storytelling is the essential human activity. The harder the situation, the more essential it is.

Author Tim O’Brien was born William Timothy O’Brien, on October 1st, 1946, in Austin, Minnesota. He grew up in the small town of Worthington, Minnesota, which is the setting of much of his work. He graduated from Macalester College with a degree in political science in 1968, then served as an infantryman with the US Army in the Vietnam War from February 1969 through March 1970.

After Vietnam O’Brien went to Harvard University and did an internship at the Washington Post. In 1973 he published his first book, a memoir If I Die in a Combat Zone, Box Me Up and Ship Me Home.

His first novel, Going After Cacciato, published by Delacorte Press in 1978, was awarded the National Book Award in 1979. His 1990 book of linked short stories, The Things They Carried, is his best-known work.

Like Elie Wiesel and the Holocaust, O’Brien has become somewhat of a spokesperson for the horrors and healing after the Vietnam War. This is not an easy assignment. But, the reward, outside of publishing, is the gift to readers. Those who lived through it have a source of comfort and understanding. Those that came after, a record of history to bear witness.