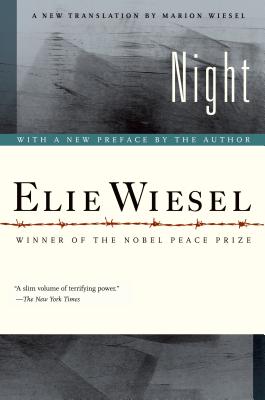 Elie Wiesel was born on September 30th, 1928, in Sighet, in the Kingdom of Romania. His parents, Sarah and Shlomo, were Jewish, and through studying Hebrew, the Torah, and reading literature, they instilled in him a foundation of faith and reason. He had two older sisters, Beatrice and Hilda, and a younger sister Tzipora. The family spoke Yiddish, but also German, Hungarian, and Romanian.

In the spring of 1944, When Wiesel was 15 years old, Germany occupied Hungary. His family was forced into a confinement ghetto, and shortly after, deported to Auschwitz concentration camp. His mother and younger sister Tzipora were murdered just after arrival. He and his father were set to hard labor and later deported to Buchenwald concentration camp, where his father died. On April 11th, 1945 the camp was liberated.

In less than a year, Wiesel had been orphaned, lost his younger sister, and left with broken faith and A-7713 tattooed on his arm.

Wiesel went to France, where he was cared for in an orphanage. There he reunited with his older sisters, Beatrice and Hilda, who had survived the war. Under the care of a Jewish organization at the orphanage, he read the classics and mastered French. In 1948 Wiesel went to Paris and studied at the Sorbonne. He became a journalist at the age of 19, writing for Israeli and French newspapers.

For ten years after the war, Wiesel refused to write or discuss his experiences. He felt he had survived to bear witness, but he did not want to “use the wrong words.” After meeting Francois Mauriac, the French author and Nobel Laureate, Wiesel began to consider writing his memory. Mauriac became his friend and mentor. Weisel’s original memoir about his Holocaust experiences, Un di velt hot geshvign (And the World Remained Silent), was 800 pages and in Yiddish. He shortened it to 127 pages for publication in French as La Nuit in 1955. The English translation took more than a year to find a publisher. Hill & Wang published Night in English in 1960, advancing Wiesel just $100 for the book. The book didn’t sell many copies at first, only 1,046 copies in the first 18 months. Through word of mouth, it grew in popularity. In 2006 Oprah Winfrey made it a spotlight selection on her show, and it sold millions of more copies. Today it sold over 10 million.

With the publication of his book, Wiesel gave a voice to the millions that were murdered during the Holocaust. In the two decades after the war, there had been a gaping void that no one knew how to fill. He went on to create a legacy of keeping that memory alive and “to fight those who would forget.”

Wiesel moved to the U.S. in 1955, and in 1969, at the age of forty-one, he married Marion Erster Rose in Israel. Rose has translated many of Wiesel’s books from French. They had one son, Shlomo Elisha Wiesel.

In the 1970s, Wiesel was a professor of Judaic students at City College. He then went to Boston University, appointed as the Andrew W. Mellon Professor in the humanities, and he spent nearly four decades teaching there.

With his wife, they founded The Elie Wiesel Foundation for Humanity, campaigning for suffering people and victimized groups throughout the world. The foundation had invested much of its money with Bernard Madoff and lost $15 million in his Ponzi scheme. The Wiesel’s lost much of their life savings as well.

In 1985 he helped break ground for the U.S. Holocaust Memorial Museum, part of his legacy of keeping the memory of the Holocaust alive in honor of the dead.

Wiesel was awarded the Nobel Peace Prize in 1986. He was also awarded the U.S. Congressional Gold Medal and the Presidential Medal of Freedom, among numerous other awards.

In 2002 his house in Sighet, where his family had been deported from, became a museum.

He was attacked in 2007 in San Francisco by a 22-year-old Holocaust denier, but he was not injured.

Wiesel wrote over 60 books in his lifetime, including two memoirs All Rivers Run to the Sea (1994) and And the Sea is Never Full (1999). In 2011 Wiesel underwent open-heart surgery, and in 2012 released the book Open Heart.

Wiesel gave himself time to learn, process, and reach maturity before recounting his experiences, but he also felt he had survived when others hadn’t to bear witness. It was not an easy thing to recount, and it was also not popular subject material at the time – people did not want to hear about the Holocaust. But eventually, his book became a gateway to memory, a path to healing, and a weapon against injustice.